Me: Chris. My Wife: Lesley. Our Dog: Muffin. My Daughter: Claire. Her Partner: Matt. And last but certainly not least. Our Motor Home: Marco.

Lesley is the brains of the operation. She is a fantastic planner and the best travel adviser you ever met. She has planned, arranged, and booked fantastic holidays in Thailand, India, Africa, Italy, Australia. You come out of your hotel in a strange country and Lesley can go “If we turn left here and go past the library that will take us to the market place!” She is also the best cook ever and hopefully we’ll be able to feature some of the fab dishes that lend themselves to motorhoming.

Me. I just drive. Lift things. Wash up. Drink beer and generally keep out the way.

Claire and Matt are not full time members of the team. They just dip in and out as they fancy Claire has her Mums organisational and planning skills but is in charge of entertainment as she is a monster partier.

Matt. He drinks beer too and will be (although he doesn’t know it yet) in charge of complicated things like showing us how to put up the awning and wind breaks.

Muffin: She’s in charge of cuddling. When she’s not chasing Rabbits she just lies on her back waiting for someone to tickle her tummy.

We are learners. We had a Trailer tent a long long time ago followed by a Toyota Hi-Ace campervan conversion but this was mostly used for visiting horse shows. When my daughter was younger I used to take all the kids to the local shop in it. In the days before seat belts and booster seats I could get a dozen or so in it.

So if you ever wondered what it’s like to have a Motor Home …………………………. stick with us! Check under the Recent Posts heading on the right hand sidebar to select the latest post.

We waited months for our new motorhome, a  Rimor Europeo 95 Plus  to be delivered and on the day it was ready my friend announced his 60th Birthday bash! We are buying the Motor home from M and C in Hull and our initial plan was to collect the Motorhome and go camping somewhere nearby to try everything out. There was no way I could miss my mates 60th though so we had to change our plans. Travel to Hull, drive the MH back, park it up and go to the party. We managed that but it was 10 o’clock before I got to the party!

Our day started early with a train trip to Hull. That’s a three hour 220 mile journey and thank goodness my wife (Lesley from now on) had the foresight to book first class tickets. We had to change at Piccadilly in Manchester to get the Hull connection and the station was chock-a-block. There was a festival on somewhere and trains in any direction were stuffed to the rafters with glitter covered welly wearing youths. We sat in first class with two other people enjoying a coffee and looking at the glittery faces pressed against our window, Thanks to Lesley’s foresight our early booking cost less than a standard ticked bought on the same day! (doesn’t seem right does it but I’m not complaining).

We arrived at Hull station around lunchtime and Kerry from M and C motorhomes (one of the nicest people you could meet) collected us from the station as arranged. When we got to M and C we were shown into the office and someone brought tea and biscuits while Steve got the paperwork ready. We could see our Motor Home outside though so were only part listening; too exciting, I just wanted the keys.

The handover takes a couple of hours and we had been given all kinds of advice “take a note pad & write everything down” “video everything on your phone.” We tried our best but the handover wasn’t the leisurely one-on-one that I’d imagined. It was bedlam in the yard that afternoon with constant interruptions from customers, and tyre kickers, mechanics and technicians. There were two handovers taking place that day and our man was constantly called away, interrupted or sent off on some other job. To top it all his first language wasn’t English and I struggled to understand some of the information he gave us. I am hard of hearing too so that didn’t help. Lesley on the other hand has ears like a robbers dog but we still missed loads.

The handover is your time to make sure everything is ok too and that you are happy with everything. There was some damage to the dining table on ours (slight but annoying on a brand new vehicle) and a little time was spent trying to swap one over from another MH without success. We decided to take the MH as it was with M and C putting a new table on order to be changed at a later date.

There is so much to take in when you get your first MH that it seems a little daunting; Fridges that can run on battery, gas or mains electricity, fresh water tanks, waste water tanks, water pumps, heaters, toilets with waste cassettes. Gas bottles, solar panels, leisure batteries and a million other things! By the time we left M and C we had forgotten half of what we’d been told and were scared to death by the other half.

Leaving M and C was a bit of an anti-climax. I think I was expecting everyone to come out and wave us off or something but we simply said goodbye and left. One of their staff had driven the MH to a filing station right next door and we just walked over and took the keys. Once we’d filled up and plugged our sat-nav in we set off for home – in the pouring rain. Yes 10 minutes after we left the heavens opened so it was a three hour drive in the rain (that’s the British Summer for you). By this time we were starving but we knew that there was a services with a Subway and a little shop not too far away. So there we are batting down the dual carriageway in the pouring rain and all of a sudden “Was that the services Lesley?” yip, we’d shot past the place and there was no turning back. Our evening meal ended up being a BLT and a Costa (out of a machine) at a filling station a bit further on. Other than that the journey was uneventful. I was impressed with the Rimor/Fiat combination. The MH drove just like a car, smooth and easy and not too slow either, you just have to be aware of how big you are!

We are keeping the MH on a secure parking site just five minutes away from home (a Caravan storage site owners association approved site) so it was straight there then take the car and head on home. 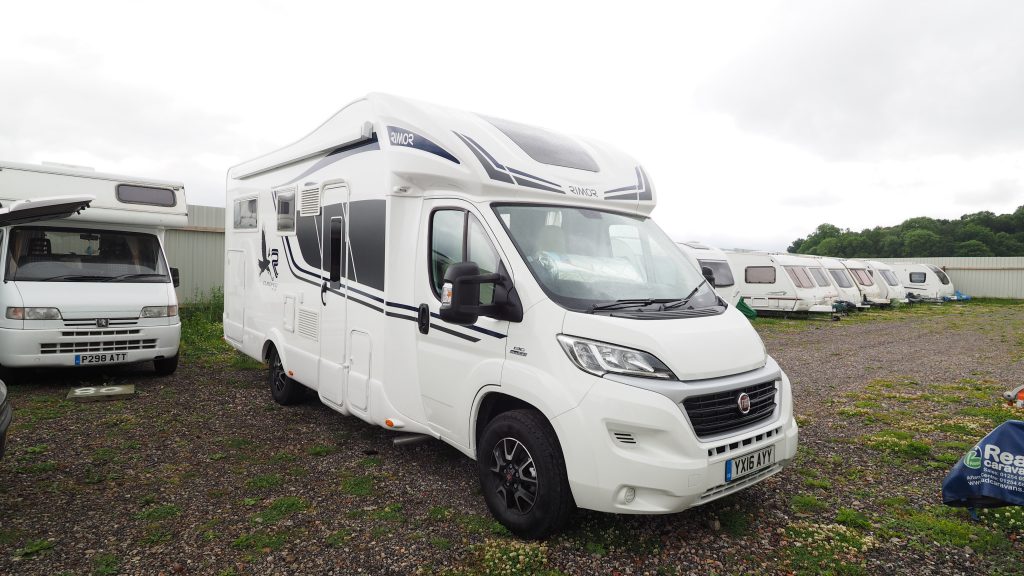 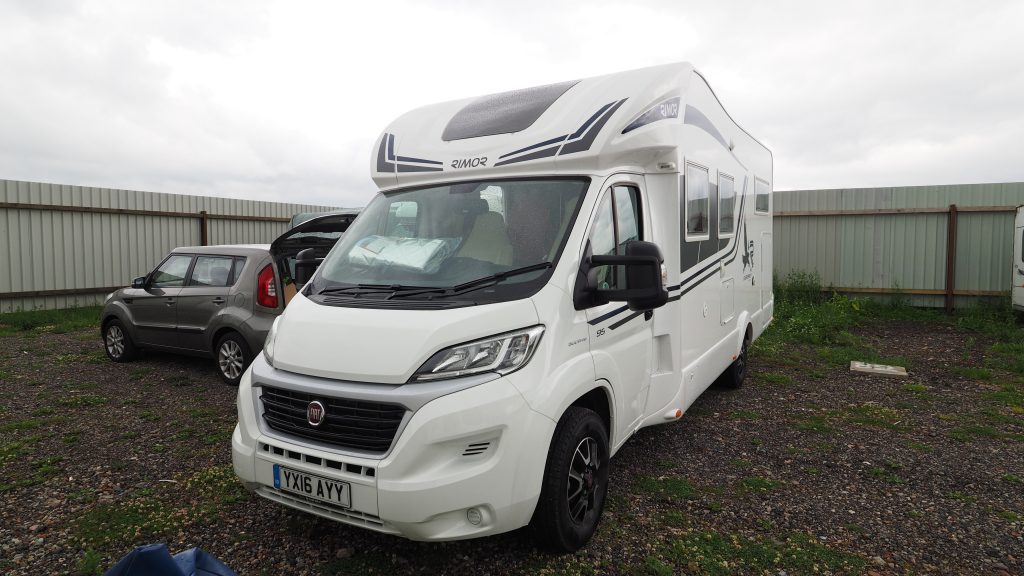 hmmm which is my best side

Parking up and going to my friends 60th turned out to be a good idea really. If we had gone straight to a campsite we wouldn’t have had a clue what we were doing but as it was we popped back every day to play in the MH, read our notes and try to figure everything out ready for our first trip out the following weekend.

We had already bought some items in readiness for the MH coming. We had cushions which we bought on holiday in Cornwall from Whistlefish 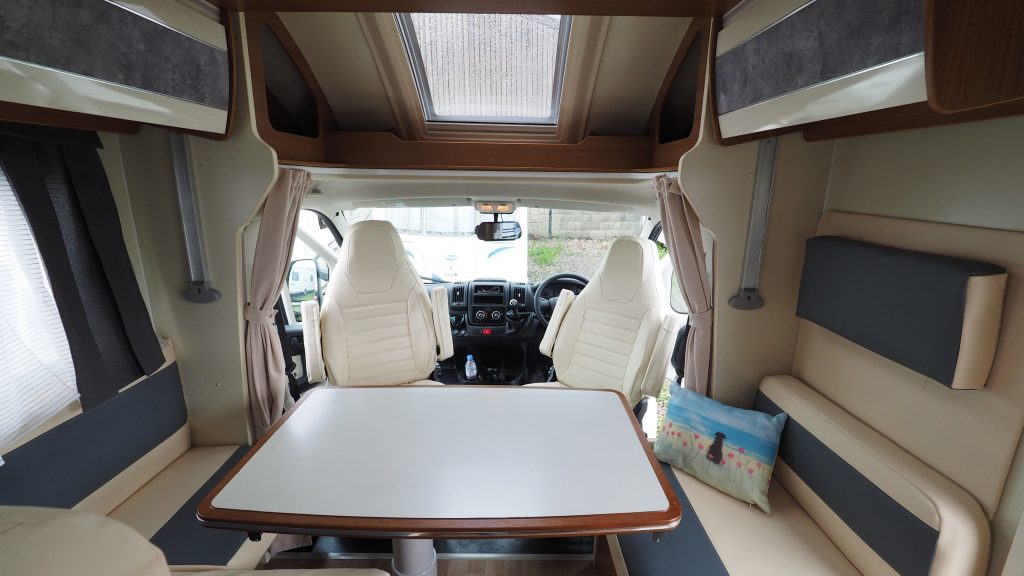 and some bedding and plates but apparently there are a million and one other things to buy. I started a list, which we’ll take a look at next time. I am half expecting an invite to Amazon’s Christmas Party!

A few pictures of Marco 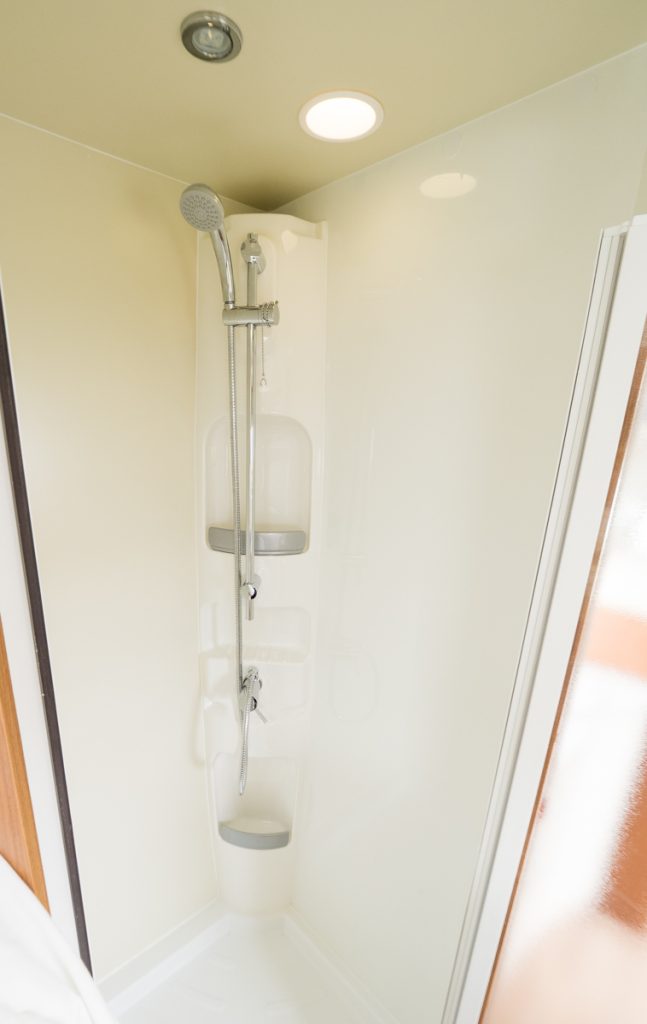 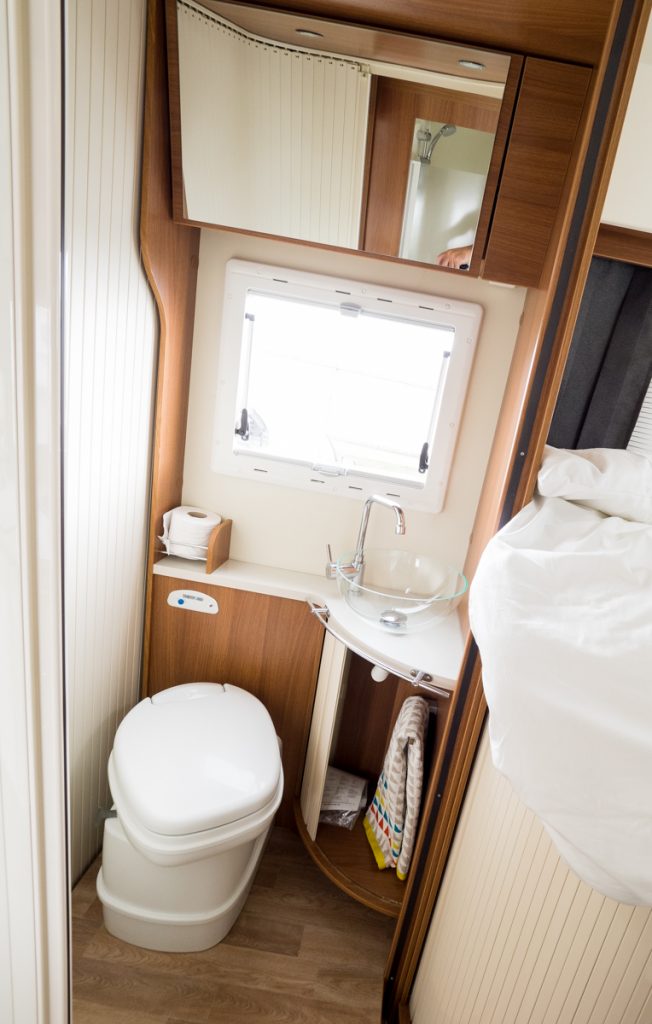 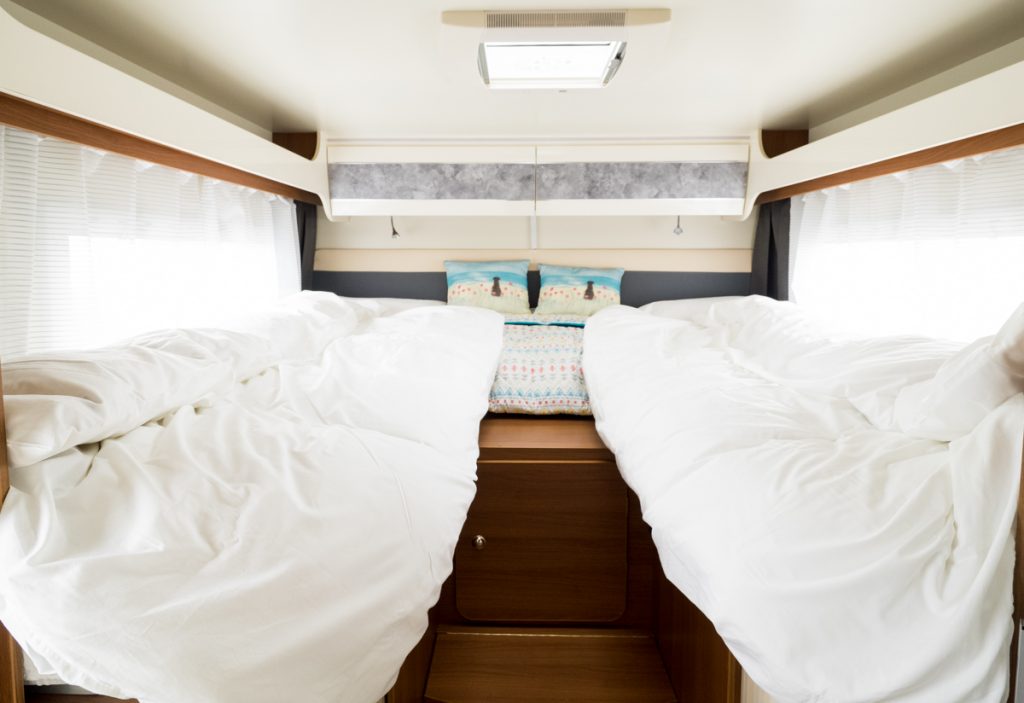 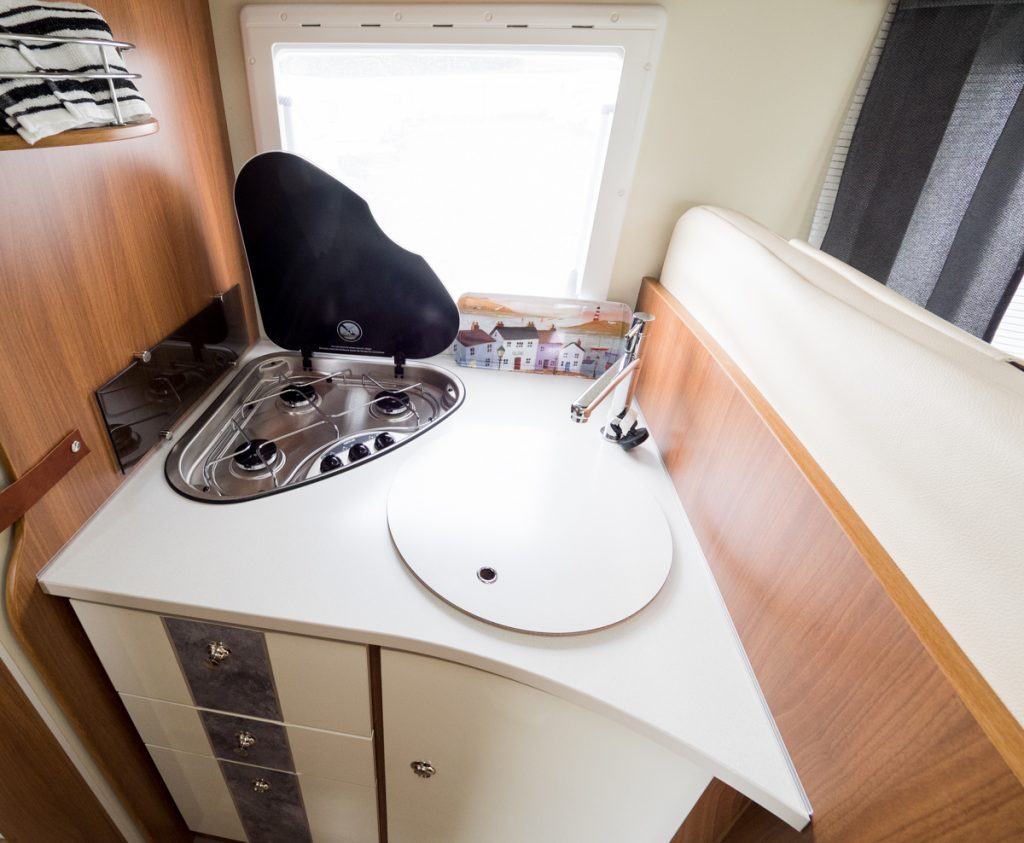 What did we learn

We learned that everything needs securing before you set off. We pulled out of the petrol station ok but after the first roundabout we had a lot of clanging rattling and banging. As my old schoolteacher used to say to me on a frequent basis “An empty vessel makes most noise.” All we had in the garage was a couple of winding poles and the stepladder for the front bed. They were rattling about good style. One of the cooker shelves also rattled itself out of its rack so it landed on the bottom shelf adding to the racket. At the services I wrapped a towel around the winding poles and we stuffed another towel in the cooker. Much quieter. These rubber tiles were on offer in Aldi so I got a couple of those and fitted out the floor of the garage with them. They look good and it’s much quieter.

We learned that due to the overhang after the rear axle that when you turn left the back end swings out to the right. (and vice versa of course). This is important to know when you are in a confined space! I just happened to look in my mirrors at the correct moment when pulling out of our parking space and saw that we were about 1 cm off the lorry parked next to us! Just something to be aware of.

Do you have any questions or suggestions? Just post in comments and let us know.