Back to the Future

A little out of chronological order this post as the trip only took place last weekend. I have older trips to blog about but Lesley couldn’t wait to have this picture of her new found favourite car posted and it’s not a Delorean – It’s a Porsche 365 Speedster. I must admit it is lovely but since I just found a restored one on ‘tinternet at £375,000.00 I think she’ll have to wait a while.

So how did that car come to be parked in a field outside a stately home? Because there was a Classic Car Show on of course. That’s why we booked this weekend at Capesthorne.

We’ve visited most of the Stately Homes and historical buildings in our local area when we were  National Trust  (NT) members many years ago but this was the first time I’d ever been to Capesthorne Hall which isn’t a NT house by the way. Capesthorne is the much loved home of the Bromley-Davenports. The house is open to the public on some days and they regularly host events in the grounds hence the classic Car Show.

Capesthorne really is a lovely building. We didn’t get to see inside as there was a Wedding on the Saturday and the Classic Car Show on the Sunday but we did get to visit the grounds and enjoy the peace and quiet on Monday morning when there was no one around but us campers. The house has a separate chapel dating back to 1887 which was open. We weren’t sure if we were allowed in there but the chapel appeared to be empty so we went in to have a little nosey and take some pictures. Then I heard someone cough so we legged it. (mostly because there was no one there!)

Inside the Chapel. imagine having your own personal chapel in your garden!

The grounds are really impressive, set in beautiful countryside with formal areas and some woodland areas too. There is a large lake complete with a whole family of Swans (we counted eight) and the lake is crossed by a gorgeous bridge, it has an old boathouse too, very picturesque.

The grounds from across the lake

Swans with the bridge in the distance

Right next door to the Hall is the Campsite. Obviously this is quiet and peaceful. If there are no events taking place and the hall is closed you are simply in the middle of nowhere. The site is advertised as having 50 pitches but you wouldn’t think so. It is very well cared for and the pitches are well spread out, all with hard standing and electric hook up. 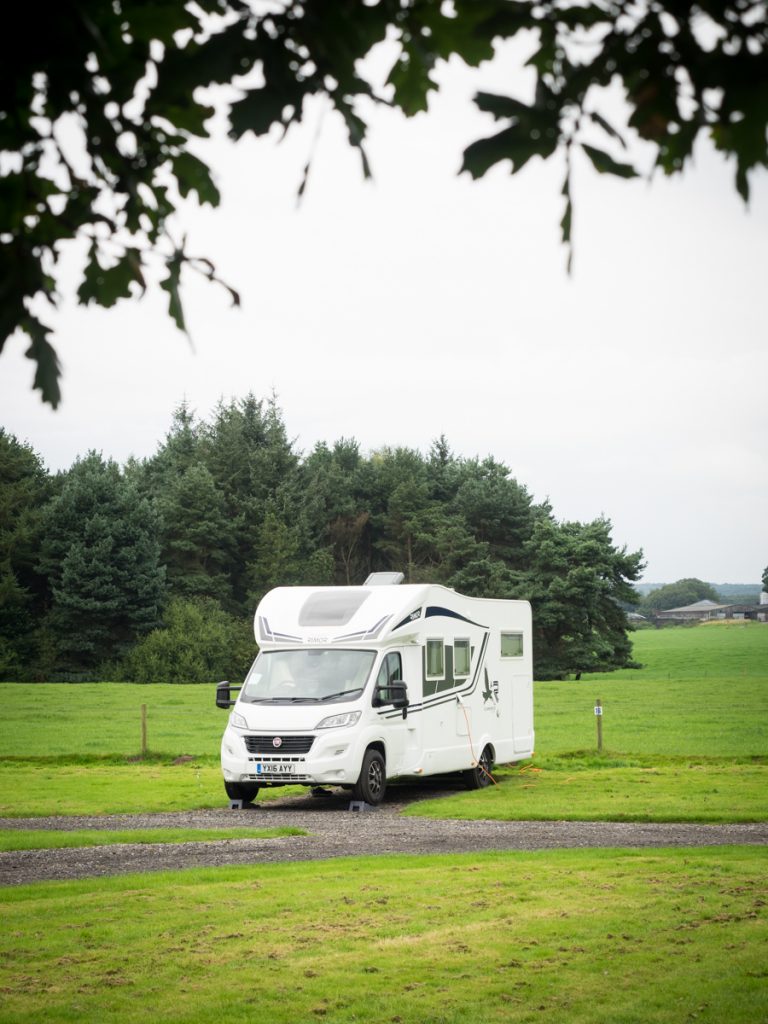 There is one facilities block, a modern wooden building with keypad entry. This building is well fitted out with a reception area, laundry and ladies and gents washrooms. The men’s room has toilets and washbasins with mirrors and there appears to be two separate shower cubicles but when you enter you find they are like little bathroom suites. Each has a toilet, washbasin with mirror and a separate shower in the corner, pretty neat I thought. Lesley tells me the Ladies is the same set up. The Elsan point was a bit of a let down. Simply a toilet type thing set in the ground behind a hedge, covered by a cast iron door which must have been taken from  the original drawbridge, it weighed a ton!

This is our seventh outing I think and we’re getting pretty good at setting Marco up. We had no problems at all this time. Straight onto our pitch. Used my little level indicator. Got the levelling ramps in place. Connected the water using the long hose again and the filler cap……doddle. Connected the electrics and turned the gas on while the water tank was filling and hey presto within 15 minutes of arriving we had a cup of tea. If only we could figure out how the lights work. At the moment that’s our biggest fail I think. (though I have a couple of other fails lined up) We have blue lights, white lights, wall lights, strip lights and an outdoor light. We go through every combination of these every time we need the lights. We get there in the end but we’ve pressed that many buttons by then we haven’t got a clue how we did it. Still it passes the time and it must keep other campers either amused or puzzled. If have to stay up a bit later than Lesley (and if there was any wine left in the bottle I’d be awake all night worrying about it). Or if we have to get up in the night for anything we use a little battery operated lantern that we were given by a friend (In jest I think). Much easier than faffing about with the lights even if it does deprive the campsite of a late night light show.

So after a nice relaxing evening of wine and books we were up bright and early and after a breakfast of sausage butties we took Muffin for a walk then had a quick look round the grounds and lake while the car people were setting up. It was great being there from the off. We usually get to these kind of events around lunchtime and end up leaving by three to miss the traffic but since we were parked a couple of hundred yards away and staying overnight we had all the time in the world.

There were some amazing cars on show. The Mercedes owners club were the featured club at this event and they had their cars inside the walls of the Stately Home. I loved the old 230 and 280SL’s on show in immaculate condition, so so nice. (Lesley’s uncle used to have one).

They also had the new AMG GT on show.

I’d love the chance to own either. The old ones or the new!

Out on the main field there was a good selection of marques with some true classics on show. Me and Lesley have owned a couple of classics in the past (Coupe Fiat and a Figaro) so we know how much hard work goes into preparing them.

Then there was the American cars from the days when they really knew how to go over the top. My favourite car of the day had to be a Cadillac Eldorado in concours condition absolutely stunning. Just perfect for driving across the Nevada dessert!

Hey, I bought a step too from one of the stalls selling auto jumble items. We were just walking past and spotted a plastic caravan step £4.00 bargain! I took it back to the MH rather than carry It round and got there just as this old couple came walking by. They must have been in their eighties and were looking at the Motor Homes and caravans. “Oh look at this one” she said to her partner. “This is lovely, it’s a Fiat too.” “Yes” I said “it’s mine, we’ve only had it three months” “oooh they’ve only had it three months” “It’s very nice” as she had a look around it. Then I realised she thought we were all part of the car show. I left them giving Marco the once over. That made me smile.

Well by 6-0’clock everyone had left and the peace and quiet was perfect. It had been a brilliant sunny day despite what Carol had said on breakfast TV and we decided to get the barbeque out and eat outdoors. We had a lovely dinner of Rump steak, (on the Barbie) mushrooms and chips (these cooked in the oven) 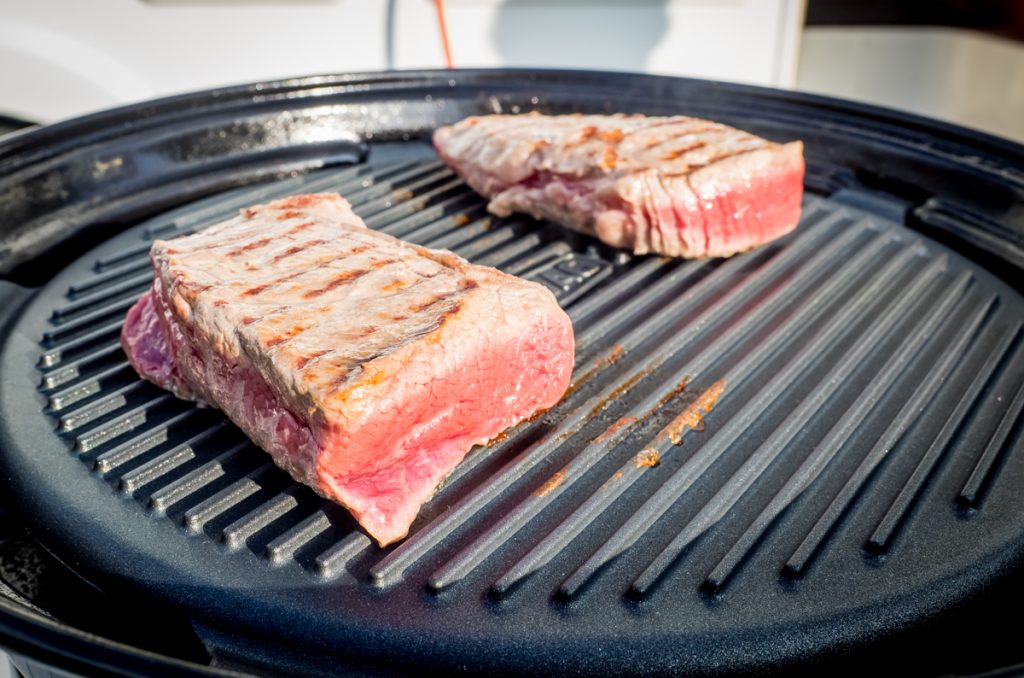 followed by more dog walking, exploring the grounds and general relaxing (I’m not sure I’ll be able to keep this up you know).

Actually if there were no events on you really would be left to your own devices on this site. Great if you want a nice relaxing stay but there is literally nowhere within walking distance. Jodrell Bank  is only 5 miles away.  Macclesfield, Alderly Edge and Congleton about 7 or 8 and this got me thinking about bikes, then electric bikes, then a motor scooter, then towing a car…………… must ease up on this red wine. Thank god I had no internet connection!

But then again – watch this space.

If you want to see more of the cars check out my Photography Blog  Chris Doyle Photography.