A Midsummer Nights Dream or A Comedy of Errors

A Midsummer Nights Dream or A Comedy of Errors

It was never meant to be but that’s what we got!

I was really looking forward this weekend. It was the weekend of Clitheroe Food Festival  which is always a great event, one of the best food festivals in the country. You can see my write up of the food festival on my photography blog. We’ve been quite a few times now but always as day visitors, meaning we have to head off home and can’t  fully enjoy the festival atmosphere (Prosecco, craft beers and wines) as we are driving.

We got it sussed this year. We booked into Clitheroe Camping and Caravan Club Site  which is within walking distance of the town yayyy. And Claire and Matt were joining us to, it was going to be a fun weekend.

We arrived Friday evening. The plan was to get Marco sorted out then have dinner (a lovely Fish casserole from M&S – the quickest option when arriving late). A little dog walking while we explore the site. A glass of wine, a bit of a read and an early night. Claire & Matt joining us in the morning.

We checked in and the lady told us they had one pitch left………. And it wasn’t a very good one. It wasn’t a very good one anytime but this morning someone had got their motorhome stuck and churned up the pitch. Lesley wasn’t happy to discover that their idea of  “hard standing” is nylon matting underneath the grass! A warden met us at the pitch to show us the situation and assist with parking up.  The pitch was a mess and Lesley wanted to leave right then. We “had words” and she reluctantly agreed to let me get Marco onto the pitch. I was reversing in as the campsite bins were located at the side of this pitch and we didn’t want the habitation door facing the bins.  No chance. The Warden was guiding us on to where the matt should be but we were bogged down straight away. I couldn’t go forward or reverse off. The Warden was collecting tree branches to put under my wheels but to no avail. A rescue party of fellow campers came to our assistance and eventually pushed us off the pitch.  Our would have been Neighbour, Brian, wanted to swap pitches with us as he reckoned he’d be ok in his smaller van (it wasn’t much smaller) but we couldn’t let him. Imagine how we’d feel enjoying a brew with him up to his axles in mud! If you ever read this Brian get in touch as I definitely owe you some beer tokens. 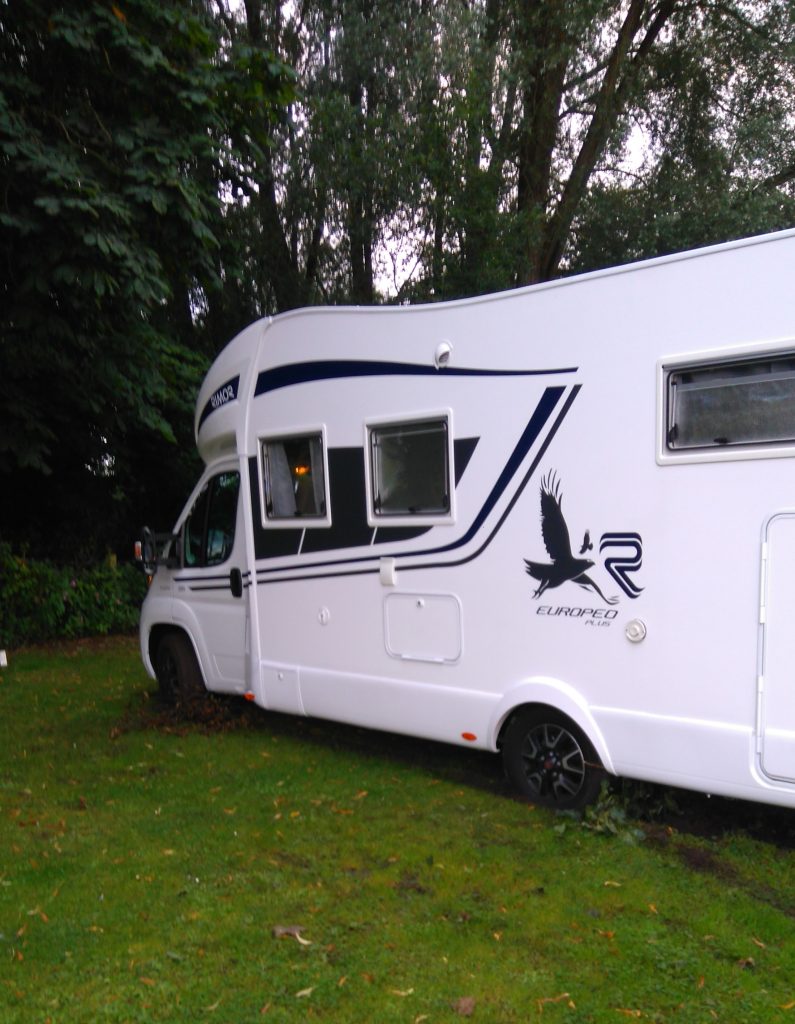 Marco – just an old stick in the mud 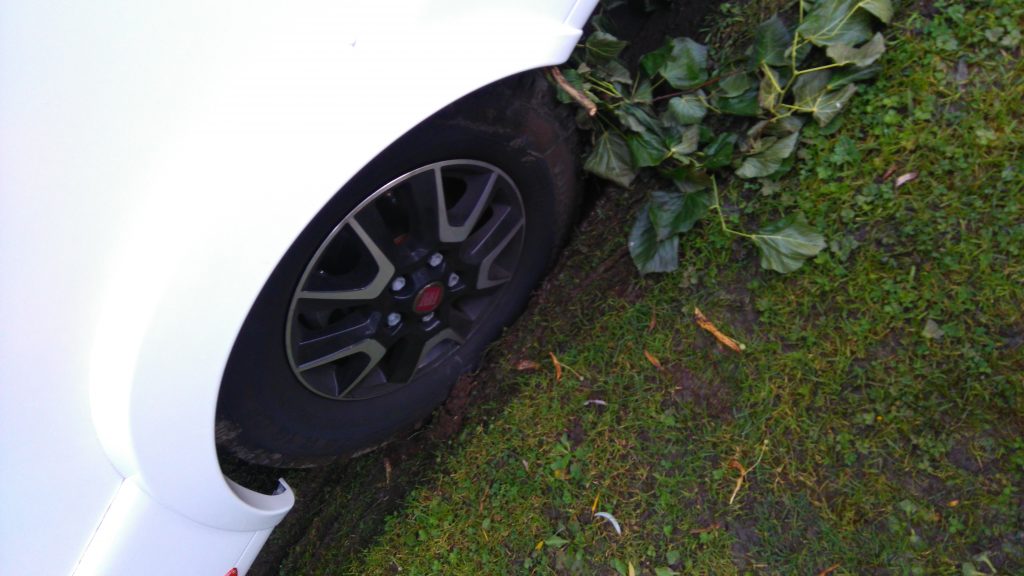 barking up the wrong tree

The site agreed to a refund which was good as I’m sure they’d got the price wrong anyway! While I was sorting that out Lesley worked her magic and got us onto another site. Everywhere in the area was full due to the food festival but Lesley got us into Beacon Fell 10 miles away. (She somehow knew they would still be open and probably have space since they are a big site – she’s a star you know!)

Beacon Fell…….. Make your way to the bar in the clubhouse and they will sort you out they said…………………

OMG I walked into the clubhouse and thought I was in an episode of Phoenix Nights – the one where they had the kids party! This was a proper club with tables & chairs, a stage and a proper bar. It was Children’s Karaoke night (most of them should have been in bed but I suppose they were on their holidays) and it was bedlam! There were kids everywhere. One of them was on stage singing. Belting it out at 100 decibels in an attempt to better the backing track which was at about 110 decibels. Me and the barmaid were shouting at each other in the corner, in the end she took 38 quid off me and told me to follow some bloke to pitches 56 to 65.

The bloke drove his little buggy as far as pitch number 41 and said “theese” I said “what?” he said “Theese good space” I said “The woman said 56 to 65” he said “these good, no neighbour, plinty rom”  His little buggy was blocking us from going any further and I was tired of arguing anyway. I reversed in to 41. He gave us a wave as he got back into his little buggy but I shouted him back just in time. Marco was sticking out about 6ft into the road. He put two bricks on the floor to stop people hitting us! I said “No, no. Move the bricks I’ll reverse in on an angle. And so  we spent the night wedged into pitch 41 and Oh no the nearest water tap was about  50 yards away. It had taken so long to get sited that I didn’t fancy moving the van and luckily I had my new 200 ft expanding hose on board.

Will it reach? Yes just about. I fitted the garden sprinkler to one end then fixed the other end to the tap allowing it to reach its full length. Once there I quickly released the garden sprinkler end and connected it to the water tank cap. Job done. It got ran over by a car once and kids kept poking it with sticks and riding Wizboards  over it but it held up just fine.

Next morning I was in a more forgiving mood and Beacon Fell looked a little better. The site seemed a bit quieter (kids were probably all in bed) I had a walk around with Muffin and found that the site Is set on different levels on the hillside. Some statics seem to be individually sited with what must be  tremendous views out towards the Lancashire coastline and others are situated down little lanes, all well established with gardens and ornaments and stuff, a little crowded though. The touring areas aren’t as nice. Either just grass fields for tents or scruffy gravel hard standing for caravans and motor homes. I wasn’t impressed with the facilities either. One big building with toilets, laundry, washing up area etc. It was quite untidy and quite old fashioned inside with one long porcelain “point and shoot” urinal! (use your imagination ladies) And tatty looking showers. Definitely in need of a refurb. I would say the site is ok for statics. Not so hot for tourers! I was talking to one couple from New Zealand who were on a 10 week tour of the UK. I didn’t mention anything as they might have loved the place but I felt quite disappointed for them.

Lesley was on the phone again after breakfast and found us another campsite 10 miles the other side of Clitheroe but a million miles away from Beacon Fell.  Rimington Caravan Park What a beautiful site. What lovely friendly owners. What a clever wife!

We reported to reception to check in and the lady gave us directions to where her husband was waiting for us to show us our pitch and tell us where everything was. There is a little shop at reception with some essentials on offer and a little club house and bar too. The facilities are the opposite of Beacon Fell. They look a bit old on the outside but are modern and clean on the inside. The site is well maintained, quiet and peaceful. Set in wide open grassland surrounded by farmland gives a great impression of space. The statics are well spaced out with some hard standing interspersed amongst them.

We got set up in no time on a proper paved hard standing pitch, though I needed the levelling ramps [live link] and whilst I hooked up etc. Claire (who had just turned up) called a taxi to take us into Clitheroe so the weekend was saved after all.

The food festival was better than it’s ever been and it was great to enjoy the whole day and just get a cab back to Marco when we were done.

One of the many food demo’s going on

Street food at its best. I had one of these chargrilled chicken burgers for lunch.

The next day gave us the opportunity to explore the site and we weren’t disappointed, it’s lovely. We will definitely be back to this one.

While we were at the food festival we visited an organic farm stall  – Gazegill organic farm – where we tried several edible flowers and had good chat about the various organic produce.  We were surprised to lear that the actual farm was right next door to our campsite. We paid them a visit before setting of the next day. Tell  the truth there’s not too much to see but you can visit the farm shop where I bought some excellent organic orange pop and the nice dark chocolate I’ve ever tasted – dark chocolate and orange yummy. and you can stroll around and visit the giant clothes where they grow stuff, and there are some cute pigs and a camera shy Turkey.

How does your garden grow!

We finished a great weekend in style by stopping at The Three Fishes http://www.thethreefishes.com/ for the best lunch I’ve had in a long time!

So you could say All’s Well That Ends Well.  At the end of the day it was Much Ado About Nothing.

What did we learn?

We learned to ask what type of hard standing a site has before making a booking. Grass with a nylon mesh underneath does not make Hard standing in our book!

Again we learned that the quieter sites run rings round the bigger sites but that might be more us than them. Though I really don’t think so.